I decided to go out and film some of my dares that I have missed out on. The first was to dress as a woman and pour custard down my knickers. I dressed in suspenders, stockings, thong and bra before putting on my male clothes. I also put on my make up before going out.
I packed a number of other clothes as I planned on doing more dares after this one.
I got to the place where the dare had to happen and then I drove a couple of hundred yards up the road until I found a gateway to park. I planned on filming from the car as I drove down, parked and got out.
At that moment a police car passed and I stayed sitting in the front seat. It got to the bottom of the hill and turned round. Both policemen gave me a look as they passed me but no problem. I waited 15 minutes and they didn't come back so I got in the back of the car to finish the change. I had now got on a jumper, skirt and boots when the police car returned. They looked at me and drove past. When they got to the bottom of the hill they turned and I lost my  bottle. I was off but they followed me. I was fully dressed with make up and breasts and, apart from my wig, was dressed as a woman and I did not want to be stopped.
I drove through a number of villages before they finally turned off. I breathed a huge sigh of relief and stopped as soon as I could to change back. The thought of what would have happened had they pulled me over doesn't bear thinking about. Obviously cross dressing is not a crime in the UK but I guess I would have been the talk of the police station at the very least.
Anyway I got home frustrated so I got dressed and went in the garden to take a few pics. Still risky but at least no cops. 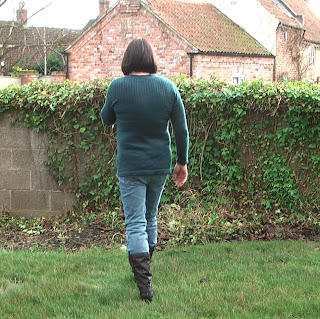 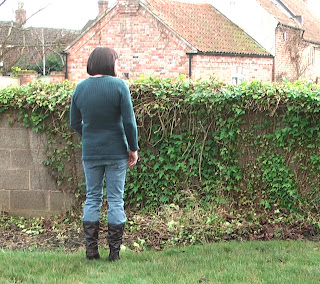 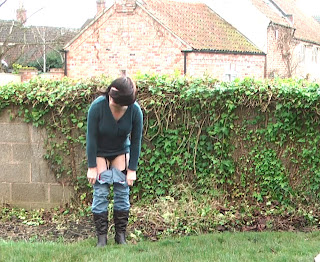 Email ThisBlogThis!Share to TwitterShare to FacebookShare to Pinterest
Labels: crossdresser