Thursday was a surprising day. I decided to go out to look at some locations for a film I want to shoot with my wife. It will be me as a male getting wet so no interest there. However I thought I would take the opportunity to dress in some way and maybe even get a little muddy. No more than that as my wife was home and I try not to do anything dressed as Davina when she is at home.
I decided to wear a thong and camisole under my jeans and sweatshirt and use an old pair of trainers. That way I could wak through some mud whilst out walking, get my trainers, sock and bottom of my jeans dirty. As long as I did the washing my wife wouldn't worry at all.
Whilst looking for a spare pair of jeans to wear I found a pair of my wifes stretch jeans. I tried them on and they felt good so I decided to use them. After all the bottom of the legs would be the most to get muddy. At the last moment I put in a pair of low heels in case I could wear them whilst I was out along with a wig and a towel.
I went to the locations for the film and picked one for future use. Whilst I was driving back I saw a small area of trees bathed in sunlight and got out to look. I couldn't resist it and decided to film there even though it was right by the road. Slipping off my jeans I pulled on my wifes and took off my trainers and socks and put on the heels.
I then filmed walking through the trees. 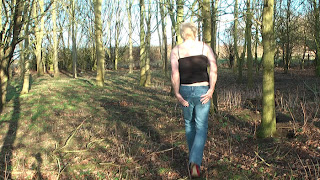 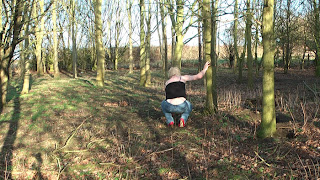 As I looked around I saw a small pond and wondered about dipping my feet in as I had always planned on getting a little muddy. I found a stick and prodded the edge and it seemed to be about six to eight inches deep. A bit more than I wanted but still OK. I set the camera up and started to film me walking into the mud. 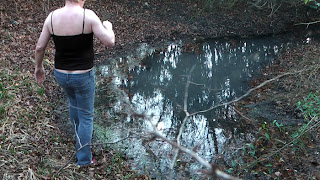 Was I in for a shock as I stepped into the mud. I sank right up to my hips. 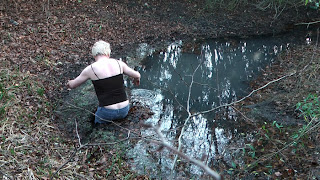 I must admit to panicking as I wasn't sure if I would stop. I did however and enjoyed the feeling of the mud around my delicate parts. Then came the moment to get out and that proved more than a little difficult. I managed it but I was coated in thick black smelly mud from the waist down. I'm glad I'd worn shoes with straps otherwise they would have been lost forever. 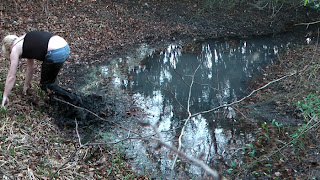 I then had more problems as I certainly hadn't planned on this. Also the car was nearby but to get to it I was on full view of the road. I waited until there was a gap in the traffic, ran to the car, put in the camera, got out the towel, my jeans and trainers and went back to the relative safety of the hedgerow. However a car had come round the bend by that time and although I was out of sight it did slow down as it came past.
Thankfully the mud was so thick little had come through the jeans and I managed to get dressed again without being completed covered in mud. When I got home I took the shoes and undies upstairs and rinsed them in the shower. The jeans I left to soak in a bucket of water and washed them the next morning. Thankfully they have come out unscathed.
Although it was all a bit of a panic at the time I now get turned on by the experience.

Here is a Google Earth link to the place I used if anyone wants to visit.
http://pininthemap.com/ppf931bf171d7798bea/earth

Let me know if you want me to join you there.
Posted by Davina at 09:30